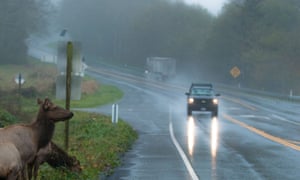 Driver in Colorado where recreational use of cannabis has been legal since 2014. Photograph: Alamy

Half of cannabis users think they can drive safely while high – are they right?

Since recreational pot smoking is now legal in California, many people think it’s ok to drive while stoned. If you get arrested for a Marijuana DUI in California the penalties can be severe. They include possible jail time, license suspension, fines, and more. In part of challenging a DUI it is essential to show there is no impairment.

Did you know that there have been studies since 2010 showing that although in theory Marijuana should make you a worse driver, tests have shown the opposite? According to an article written in The Guardian, People who are stoned often think they’re being funnier than they actually are, now we know they overestimate their driving ability too.

Almost half of cannabis users believe it’s safe to drive when you’re high, according to a new study by PSB Research and Buzzfeed News. Perhaps unsurprisingly, those who abstain from weed, take a different view – only 14% believe someone who’s stoned can drive safely.

The dangers of driving while intoxicated have been so well established that it’s easy to assume it’s the abstainers who are right and pot-smokers are simply failing to recognize the danger they pose to themselves. But a number of studies into the issue have produced a murkier picture.

It’s true that THC, the psychoactive ingredient in cannabis, can impair a person’s levels of attention and their perception of time and speed, important skills you might think for driving a car. One meta-analysis of 60 studies found that marijuana use causes impairment on every measure of safe driving, including motor-coordination, visual function and completion of complex tasks.

But a 2010 analysis published in the American Journal of Addiction found that while “cannabis and alcohol acutely impair several driving-related skills … marijuana smokers tend to compensate effectively while driving by utilizing a variety of behavioral strategies”. The authors concluded that while marijuana should, in theory, make you a worse driver, in tests it doesn’t seem to. “Cognitive studies suggest that cannabis use may lead to unsafe driving, experimental studies have suggested that it can have the opposite effect,” they wrote.

See the below link for which gives examples of studies going back almost a decade: