Due to the Coronavirus, now is one of the best times to wrap up cases, deal with probation violations, resolve outstanding warrants, clear holds on your license, failure to appears and, most importantly, negotiate plea deals!

According to criminal lawyer Bobby Shamuilian of My Rights Law Group – Criminal & DUI Attorneys, “Courts across California are currently closed in order to help prevent the spread of COVID-19 and when they reopen their doors they will be severely backlogged. If you’ve been charged with a criminal offense in California you may be in luck and able to benefit substantially from this backlog if you act now!”

The courts will be overwhelmed with work when they reopen their doors after the threat of COVID-19 has passed. Be first in line to secure the best possible plea deal, by contacting My Rights Law Group – Criminal & DUI Attorneys at 888-702-8882. 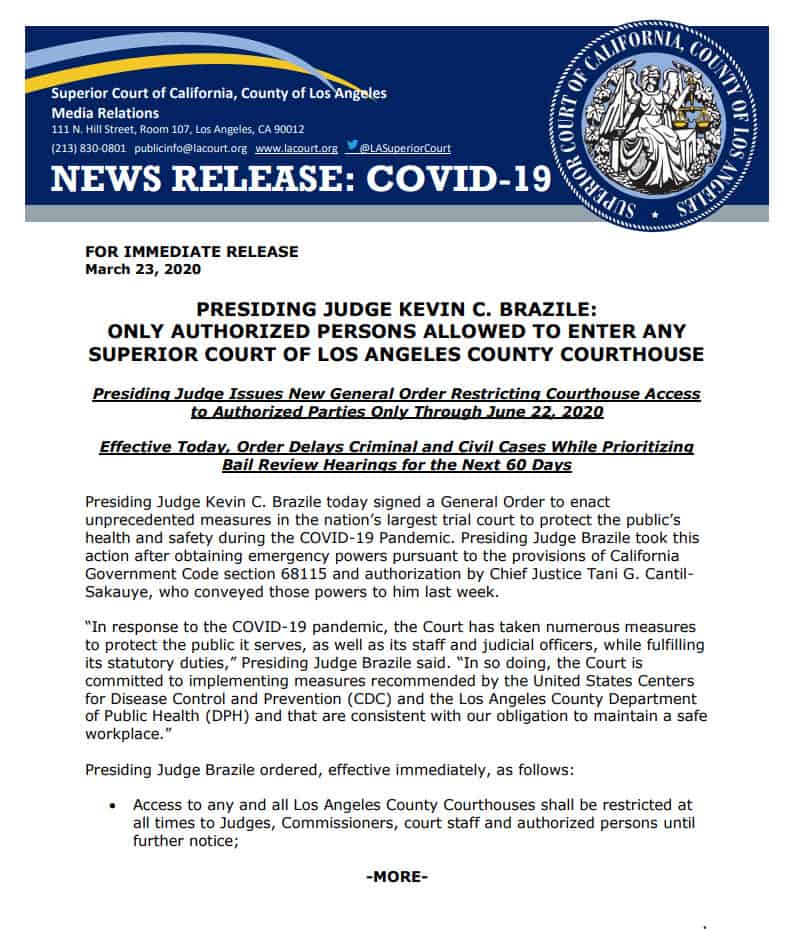 A plea deal (also commonly referred to as a “plea bargain” or a “plea agreement”) is a negotiated agreement between a criminal defendant and the prosecution. There are three different types of plea bargains, each of which is described below, but most often the bargain is negotiated before the case goes to trial and involves the defendant agreeing to plead “no contest” or “guilty” to a crime (or crimes) in exchange for some benefit (typically dismissal of some charges and/or reduction of the severity of the charge(s) being faced).

The Three Types of Plea Bargains

Not all plea bargains are alike, but they do generally fall into one of the three following categories:

Why Would the Prosecution Agree to a Plea Agreement?

You may be wondering why would the prosecution agree to a plea agreement, what do they have to gain? The answer to this question varies a bit from case to case, but the prosecution can actually gain quite a lot by agreeing to a plea bargain. For instance, if the bargain allows the case to be settled without going to court then they have freed up substantial time and other resources that can now be directed towards prosecuting other more pressing cases. Additionally, settling a case via plea bargain takes away the uncertainty that is inherent in going to trial. Even if the prosecution has a solid case against you taking your case to court is still a bit risky for them because juries can be rather unpredictable.

Q: Are plea negotiations conducted solely between the defense and the prosecution?

A: While most plea negotiations only involve the defense and the prosecution (and approval by the court), the victims of the crime (or their surviving family members) are sometimes involved in the plea bargain process. Allowing the victims to have input in plea negotiations is something that has become a bit more popular in recent years but still is not the norm.

Q: Who decides whether or not to accept a plea offer?

A: You, the defendant, ultimately gets to decide whether or not you are going to accept a plea deal that is offered to you. Your lawyer can, and will, counsel you on whether or not they believe that taking the deal would be in your best interest, but at the end of the day, the decision whether or not to take a plea offer is completely up to you.

A: Yes, plea bargain negotiating commonly takes place in California criminal cases as striking a deal provides a measure of certainty for both sides that is lacking in cases that end up going to trial. However, plea negotiations are not as simple as they may at first appear. The defense must be intimately familiar with each legal element of the crime charged, understand the potential weight of each piece of evidence presented, be familiar with sentencing guidelines/trends and, at this moment in time, understand the huge advantage that criminal defendants will have when the courts reopen after the Coronavirus passes.

Why NOW Is the Time to Act Thanks to the Coronavirus

When the courts reopen their doors they are going to be severely backlogged. This will be the ideal time to negotiate a plea bargain as everyone from prosecutors to judges will be overwhelmed with work and be highly incentivized to cut deals and approve plea bargains wherever possible. Take advantage of this unique opportunity and act now so that you can be at the front of the line when the courts come back online!

Be at the Front of the Line to Get the Best Plea Deal Possible!

Act now to get the best plea deal possible while the deals are hot! My Rights Law Group – Criminal & DUI Attorneys can start preparing everything that you’ll need now while the courts are closed, then they’ll be at the front of the line and ready to move forward when their doors reopen. If you hire them as your private counsel you won’t even need to appear in person and put yourself at risk, even if you’ve been charged with a felony offense! Whether you are a California resident or you live out of state and are required to appear here in California they can help. Get started today by calling their toll-free number today at (888) 702-8882 or by filling out their online contact form. You will be amazed at how much work they can get done on your case over the phone, Skype, Zoom, Whatsapp, and email. If you’ve been charged and waiting for the courts to reopen, the experienced criminal and DUI attorneys of My Rights Law Group – Criminal & DUI Attorneys can get to work mounting your defense today.